Buy a used or certified car in Minnesota from Tenvoorde Ford car dealer.

The family-owned and operated Tenvoorde Motor Co. is the world's oldest family-owned Ford franchise. The current third generation Tenvoordes run the dealership, while the fourth generation consists of Debbie, Brian, and Eric. Jack Tenvoorde, who died in 2007, left a solid foundation for future generations. Brian, Mike, and Debbie are continuing the family's legacy and building on Jack's success.

After Steve Tenvoorde died in 1943, his son Cy took over the business. Since there were no new cars for sale during World War II, the dealership focused on repairing engines. Customers were encouraged to take their cars to the dealership for routine maintenance. The dealership bought a crankshaft grinder for $8,000, which quickly paid for itself in repairs. Today, it employs over a hundred people. If you are looking for a great place to work, apply today!

Cy Tenvoorde joined the company in 1921 as a bookkeeper. In 1927, his father Steve became the president of the company. His sons Cy and Walter joined the family business in 1927, and in 1951, he built a new dealership. He paid cash for a 3/4-acre lot in downtown St. Cloud. Cy Tenvoorde's legacy lives on in his sons' lives and the company's.

If you are looking for a career in the automobile industry, Tenvoorde Ford Inc. is a great place to work! This Ford dealership is located at 185 Roosevelt Rd in Saint Cloud, MN. In addition to new and used cars, the dealership offers parts and accessories, financing, and auto repair. Founded in 1903, the company is a pillar of the community and employs many graduates from nearby Saint Mary's University. They also offer a competitive pay and benefits package. 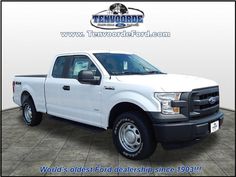 Looking to purchase a vehicle in great condition? Looking to sell your vehicle and the best possible price? Are you looking to trade-in your vehicle and get top dollar? Tenvoorde Ford is the perfect dealership for you! They are located at 185 Roosevelt Rd, Saint Cloud, MN 56301.

No more rushing to the banks to get financing at the best rates. Tenvoorde Ford provides great financing options including the best rates, low APR and no hidden charges. Get pre-approved for your dream car today!